Home » Divorce and Children » It Takes A Solomon: Tearing Children Apart in Divorce

It Takes A Solomon: Tearing Children Apart in Divorce

When a couple with children decide that it is time to divorce it is important for them to remember they are not divorcing their children, nor are they divorcing their shared role as parent. The decisions parents make regarding how they will share parenting can lead to depression, anxiety, acting out behaviors, and even  suicide. In divorce and family mediation, couples come to the table more often than not with unresolved conflict regarding what went wrong with the marriage and who is at fault. Many times, by the time a divorcing couple make it to mediation, one of them has already moved on to another relationship or moved to a new location. New problems are added to the equation and must be resolved before getting to what is really important in these mediations: the children.

Today more parents are deciding on shared parenting or joint custody. It is also not uncommon for fathers to want a 50/50 arrangement, literally split-custody. With this type of arrangement, the child or children have room and belonging in both parents’ homes, and they alternate either every other day, or 3 days out of four with alternating weekends. While this may seem the equitable thing to do for the parents, it can be quite traumatizing for the children.

When there are unresolved issues brought to the table, this already complicated arrangement can become even worse. For example, if the arrangement is every other day, but the father has moved to a new location that requires a 30-minute drive to pick the child or children up from school on “his” day, it may seem unreasonable for the mother to demand that the children remain in afterschool activities that run well into the evening, thus cutting into the father’s ability to have home time with the children.

Taking Parents Out of the Equation, Makes for Better Parenting 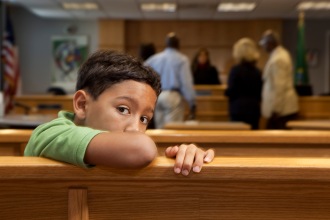 There are times when a couple have been separated for several months and the other parent is in a new relationship. The primary care parent, the legal address of the children for school purposes, may insist that the new significant other not be allowed to be in the other parent’s home while the children are there. While this may seem to not affect the children, it does indirectly so, because it is sure to create conflict in the parent’s new relationship which is bound to affect time spent with the children.

Other issues that arise in these types of arrangements is that one or both parents may take an entirely regimented attitude toward the arrangement. What this means is that there is limited to no flexibility for special occasions. For example: Tuesday night is Dad’s night with the children. However, it is also the night where he has a business dinner he has been told he must attend. Mom does not agree with the request to switch nights, she has her Tuesday night with “the girls” and Dad will just have to give up the dinner or get a sitter for the children.

For the Sake of the Children

It is impossible to foresee every type of situation that can arise that will negatively impact children with a shared arrangement such as this. Some courts frown upon this arrangement, recognizing that it is disruptive to the child’s routine. However, those that do not, and these types of arrangements are allowed, typically see families back within a year or two for modifications to the arrangements.

While all of these are measures created and installed to prevent emotional trauma to the children and to promote a greater sense of stability, it is all still up to the parents to make the arrangements work.

There is generally very little doubt that divorcing parents genuinely love their children, and do genuinely want what is in the child or children’s best interest. However, when one is angry, resentful, or experiencing jealousy it is difficult to see any part of that parent as in the best interest of the children.

Serving the best interest of the children during divorce is difficult, because emotions do get involved. It is important for parents to realize how very vulnerable their children are and that the loss of the sense of family can be quite devastating.

Before taking the issue of divorce and child custody before the courts, parents may benefit from individual, or couple’s counseling expressly geared toward divorcing couples. Getting anger, resentment, and jealousy out of the way, and off the table before attending mediation will save so much heartache for both the parents and the children down the road. It is important not to forget about the children while sorting through marital conflict, it would also benefit the children to see a counselor, an outside party and a safe place to talk about their emotions. Parents should also keep a close watch on their children for warning signs of depression. The best thing a divorcing couple can do for their children is to put their needs first, and let them know that you are not divorcing them, or your shared role as parent.